The Founding of the JFRC 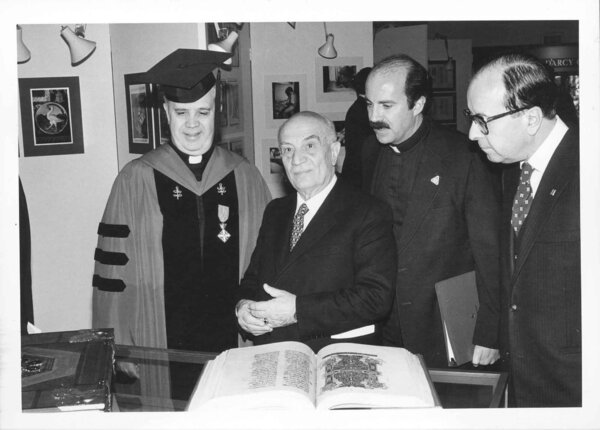 In 1960, with the approval of Loyola University president James Maguire, S.J., John Felice, S.J. led a group of students across Europe. Having grown up in Malta, Felice was not a stranger to giving tours. During the American occupation of Italy following World War II, he frequently showed American soldiers around, describing them as "dry sponges" ready to absorb all the information and experience of a new, yet much older culture. This experience provided him with the ability for leading the 1960 tour, which was so successful that another was planned for 1961. It was on this later journey that Felice met with the Italian president, Giovanni Gronchi, and Clare Boothe Luce, United States Ambassador to Italy. That meeting secured the beginnings of Loyola's Rome Center for Liberal Arts.

Felice's sister suggested he try and meet with the Italian president, who had been friends with their father, while on the 1961 tour. To his surprise, he was invited to the Quirinal Palace. President Gronchi then invited him to lunch with the American ambassador, who Felice did not know. During the luncheon, Clare Boothe Luce proposed that Felice bring students to Rome on a more permanent basis, a full semester or year, not just for a month or so like he had been doing. Felice said he would bring that idea to Loyola if the Italian president agreed - and to his surprise, Gronchi did.  After another meeting the following day with the Italian Minister of Education, Felice came back to the university with the promised use of a building near the state department. But there was still the problem of drumming up enough support and students at home.

Happily, Father Maguire placed his support behind the idea. But the vice president at the time, Robert Mulligan, S.J., required Felice to create a budget and have at least seventy students by the Christmas break. Seventy-eight students ended up placing a deposit and left in 1962 for the first Rome Center for Liberal Arts study abroad program, and the first permanent American university program in Rome. Felice guided the program and ensured its success in the early days. But, as he is clear to state when talking about that first group of students, "Together we built the Rome Center."