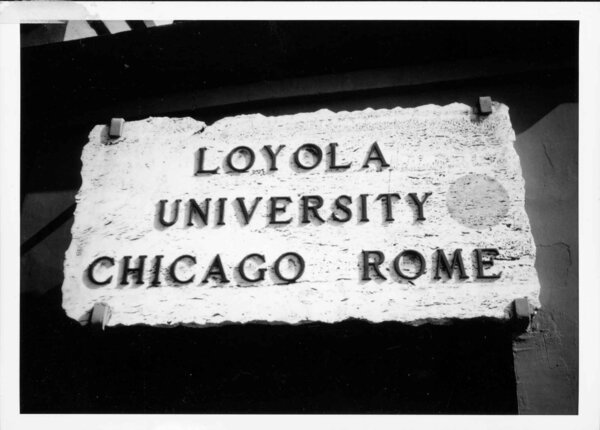 Welcome to the John Felice Rome Center (JFRC) digital exhibit. The Loyola University Chicago Rome Center for Liberal Arts began in 1962 and though the site of the campus has changed since then, it has remained in Rome.  Today, the Rome Center for Liberal Arts is named after John Felice,  the founder of the program and a former Maltese Jesuit. Through this European outpost of Loyola, students are provided opportunities to learn a new language, continue their studies, travel throughout Europe, and experience the history and culture of another country firsthand. This exhibit will first describe the founding of the Rome Center, highlighting how instrumental John Felice was to its establishment. It will then cover the various locations of the Rome Center campus, ending in the Via Massimi, now the permanent home of the John Felice Rome Center. Experiences of students will also be recounted, especially those in the early days of the program, highlighting the influence the JFRC has had in their lives. The exhibit ends with how the JFRC has changed, how it has stayed the same, and how it has remained an essential part of Loyola today.