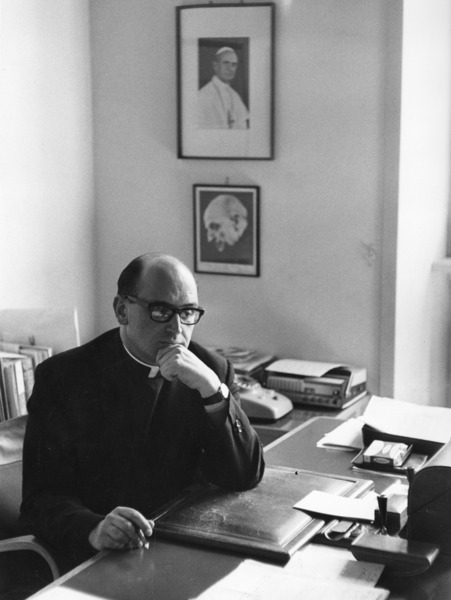 John Felice, S.J., was the founding director and principle steward of Loyola's Rome Center for Liberal Arts through its first half century. Born in Malta, he served in the British Army during World War II. Following the war he entered the Society of Jesus and was ordained in 1957. Two years later, he was appointed associate professor of Theology at Loyola University Chicago. In 1965, three years into leading the Rome Center for Liberal Arts program, he became an American citizen and received the Medaglio d'Oro, a high-level Italian award.  In 1973, he left the Society of Jesus and the position of Director of the Rome Center, but stayed on as dean of students. He became director again in in 1992, before retiring in 1998. Throughout Felice's career a devotion to the Rome Center and to his students shines through. There are many stories, often repeated, of his driving to the police station to pick up students who had jumped in the Trevi fountain or otherwise gotten in trouble. If a student did not have enough money to go on some of the more expensive tours through North Africa or Europe, he would appoint them as a chaperone, with their own stipend. He repeatedly emphasized the importance of students and community to the Rome Center.