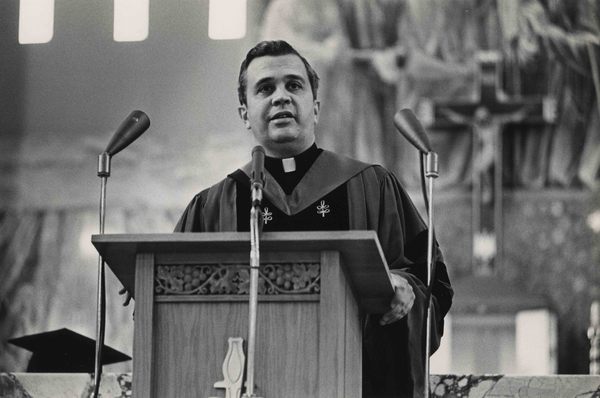 Here is an excerpt from Baumhart's inauguration speech. He discusses Loyola's relationship to the city of Chicago, his relationship with students, and Loyola's financial situation.

At his inauguration in 1970, Rev. Baumhart relayed his goals for the university to accomplish.  These goals included long-term actions such as involving more university members in major decisions, getting the university out of debt, and elevating the role of women at Loyola.  Baumhart promised that major building projects would not be approved until he was sure they fit Loyola's priorities.  At the time, Lewis Towers at the Water Tower Campus was a particular focus for improvement.  Other components that Baumhart wished to implement were student communication and an improved sense of Jesuit values in all facets of the university. 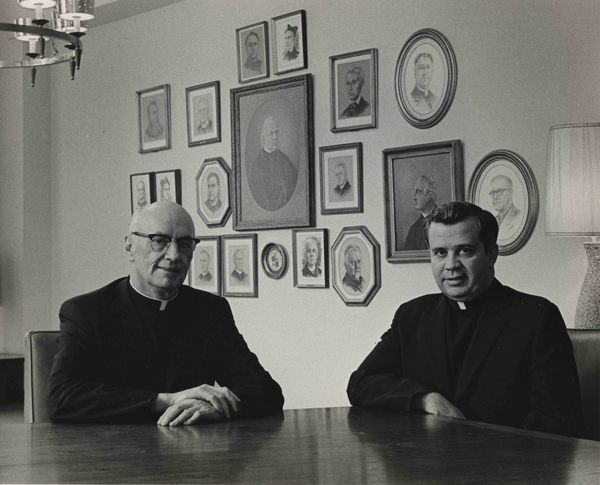 President Baumhart and Chancellor Maguire pose with portraits of Loyola's past presidents behind them.

In his first year, Baumhart oversaw Loyola's centennial celebration and official name change to "Loyola University of Chicago," which has remained the school's formal title.  The new administrative offices of Chancellor and General Counsel were also created.  Former president Rev. Maguire became the first university Chancellor.  Additionally, Baumhart announced a fundraising campaign called PLUS (Progress for Loyola University in the Seventies).  The campaign consisted of a $150 million goal over ten years in order to pay off existing construction costs, support faculty development, and save for new campus buildings.