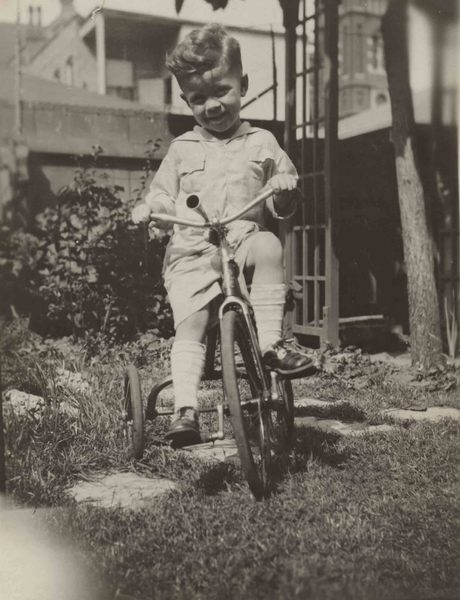 Raymond C. Baumhart was born in Chicago, Illinois in 1923 to parents Emil Baumhart and Florence Weidner.  The oldest of five children, he grew up near his parish church, St. Benedict's, on Irving Park Road. As a child, Ray (or "Skip," as he was known to some) participated in many activities at the neighborhood Boys Club.  He played football, baseball, basketball, and regularly won chess matches. 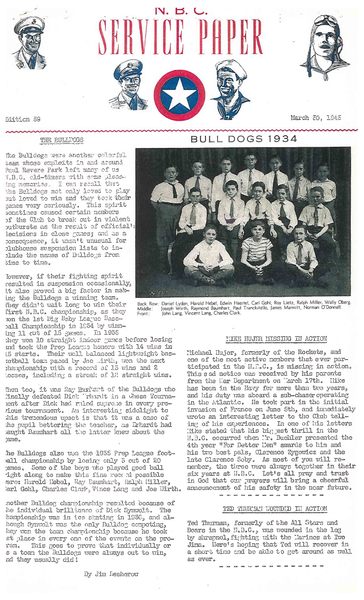 A page from the Neighborhood Boys Club Service Paper, which reminisces about Ray's 1934 club team, the Bulldogs.

In his teenage years, Ray attended high school at DePaul Academy.  He was viewed as a competent leader and efficient team manager.  Upon graduating from high school and college, Ray hoped to find a career somewhere in business or as a reporter.

After only a year at DePaul University, Baumhart enlisted in the Navy in 1942. He transferred to Northwestern University in Evanston a year later to go into uniform in Chicago.  In 1944, Baumhart was transferred to Harvard University for additional training.  From there, he went to sea on the President Polk as a junior officer in San Francisco in 1945. 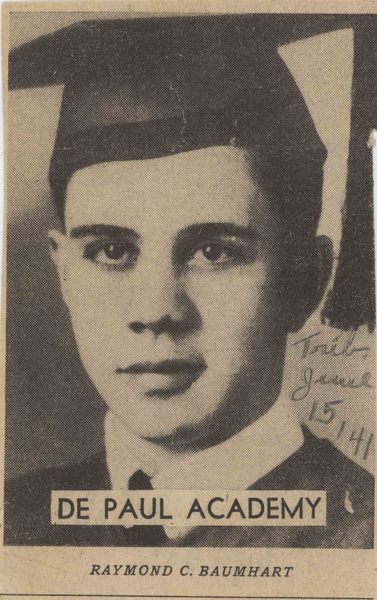 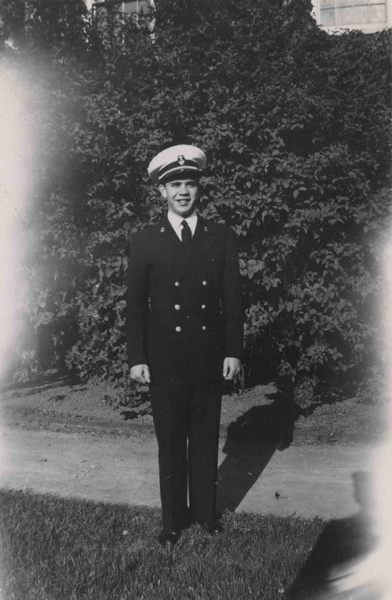 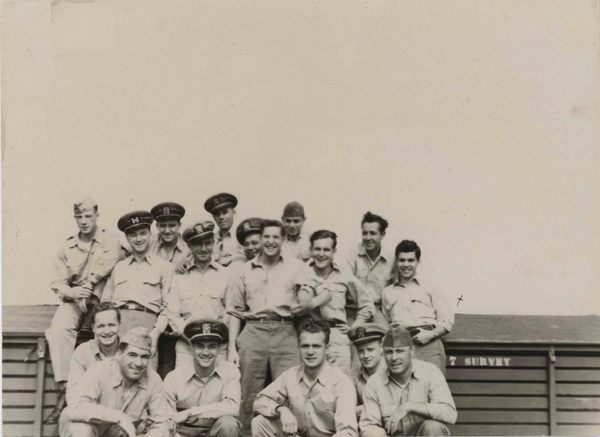 Baumhart (top row, far right) pictured with his fellow Navy officers and engineers as they sail to Manila. 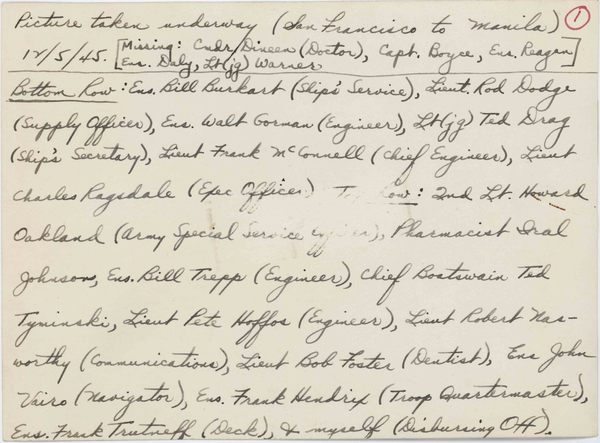 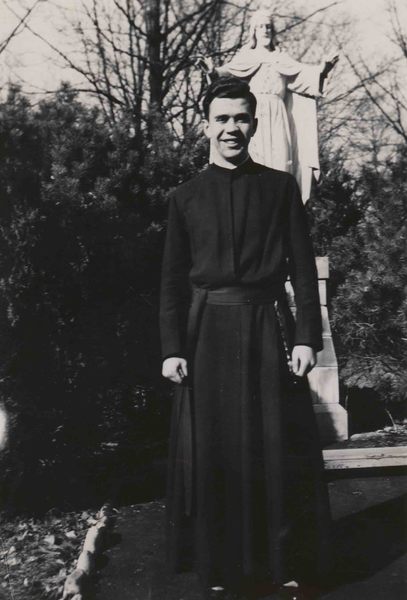 Raymond Baumhart one year after joining the Milford Novitiate 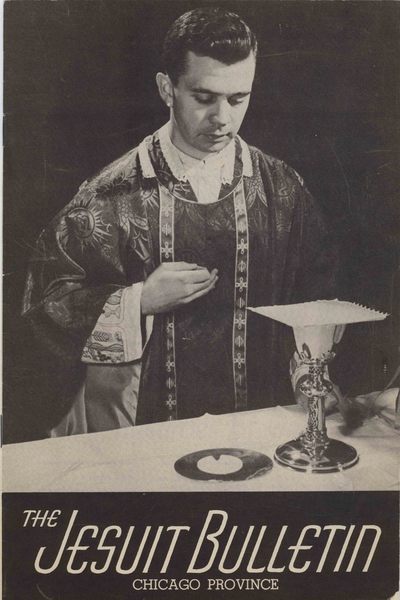 Rev. Baumhart says his first mass at St. Benedict's in 1957.

Raymond decided to enter the priesthood while he was at sea.  Once he returned home from active duty in 1946, Baumhart joined the Society of Jesus at the Milford Novitiate in Milford, Ohio.  He spent the next eleven years studying Jesuit pedagogy.  On June 30, 1957, Rev. Baumhart celebrated his first mass as an ordained priest at his neighborhood parish. 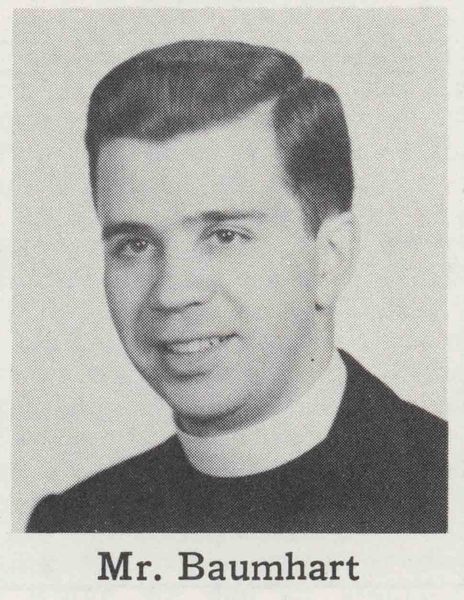 Baumhart's portrait from his days at Harvard

The Chicago Provincial assigned Baumhart to teach at Loyola University Chicago as a professor in Management in 1962.  One year later, Rev. Baumhart was promoted to Associate Dean of the School of Business, and then to Dean in 1964.  At the same time, Rev. Baumhart was studying for his doctorate in Business from Harvard University.  He received the degree in 1963, having written a dissertation on business ethics, and was the first clergyman to receive a doctorate in Business Administration from Harvard.  Baumhart remained in this position until 1966, when he moved to Cambridge, Massachusetts as a fellow at the Cambridge Center for Social Studies. 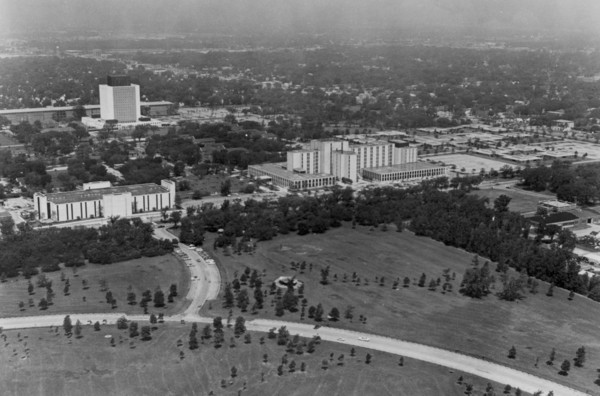