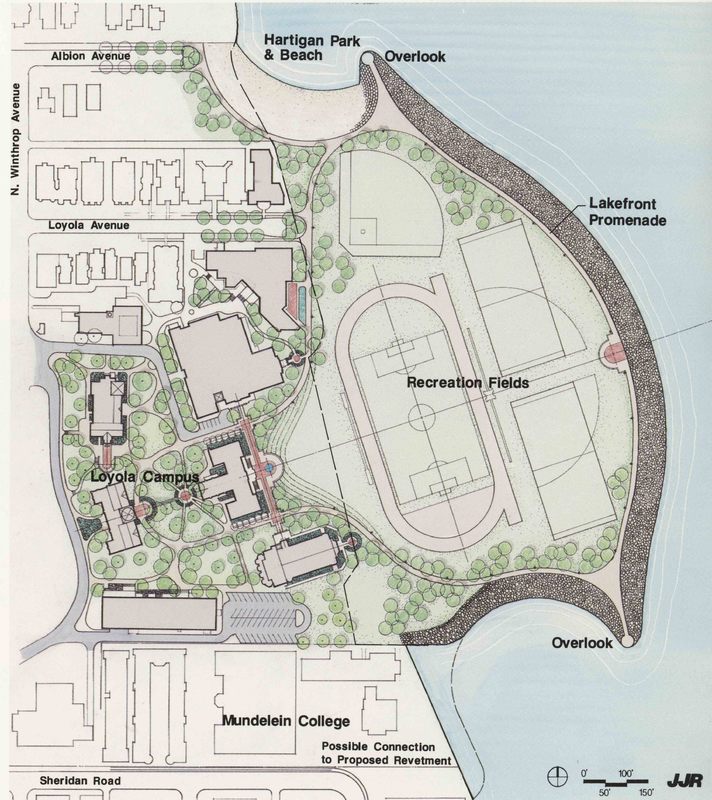 An color rendering on the proposed lakefill project

In 1986, Loyola administration began planning a lakefill project to extend the school's property 16 acres into Lake Michigan.  The extra land would house tennis courts, running tracks, and park space for recreational use.  It would also prevent frequent flooding on the lakefront and save buildings from erosion.

Rogers Park residents did not support the plan--they worried about public park access as well as late-night noise.  Administration at Mundelein College also had reservations about the project, because the college's lakeside buildings were prone to damage from strong waves.

After consulting with a Canadian lab testing team and legal officials, Loyola moved forward with the plan after purchasing the lake property for $10,000.  However, in 1990, environmentalist groups filed suit against Loyola, and Judge Marvin Aspen ruled in favor of the groups, citing that Loyola was violating "public trust" doctrine set in the 1890s.

School officials had the opportunity to appeal the decision, but backed out of the project due to financial costs.  The court decision was a disappointment to many who supported the plan, especially Rev. Baumhart, who saw this project as an answer to Loyola's need for land expansion.