The History of Mundelein College 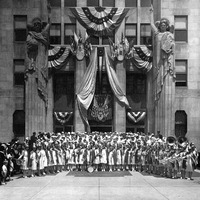 Mundelein College was founded by the Sisters of Charity of the Blessed Virgin Mary (BVMs), in response to a call by Cardinal George Mundelein for a Catholic women’s college in Chicago, Illinois. Construction of the college’s iconic art deco skyscraper began in 1929 and Mundelein opened its doors to students in the fall of 1930 as the first self-contained skyscraper college for women.  For the next sixty years, Mundelein College offered its students, young urban women, a comprehensive Catholic liberal arts education. The women who were educated at Mundelein came from many ethnic and socio-economic groups and were often the first in their families to attend college. 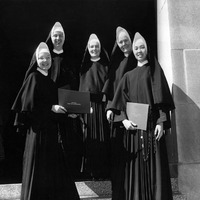 From 1930 to 1957, Mundelein College established its identity as a modern educational institution for women.  Originally beginning in the skyscraper, Mundelein soon expanded by purchasing existing nearby buildings. Student life was part of the college community from the very start with various student organizations and several publications such as The Skyscraper and The Tower.  During World War II, many members of the campus community dedicated themselves to the war effort, taking leaves of absence from the college.  By 1955, Mundelein celebrated its twenty-fifth anniversary with Cardinal Samuel Stritch and Chicago Mayor Richard J. Daley. From the college’s inception to 1957, several women served as presidents of the college.

Ann Ida Gannon was Mundelein College’s longest-serving president from 1957 to 1975. Throughout  her long tenure, she navigated a tumultuous period in the campus’ and nation’s history.  During this period, students participated in various forms of activism.  In 1965, seven sisters and a busload of students traveled to Selma, Alabama where they partook in a civil rights march from Selma to Montgomery.  Students declared the campus to be “on strike” in 1970 as a means of protest against the Vietnam War, the United States government’s intervention in Cambodia, and the Kent State shootings.  Students and faculty together led the college towards being active in its consideration of social justice issues. 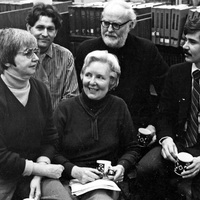 After 1975, Mundelein College’s administration sought to make the college more inclusive and attractive to more students.  As a result, they initiated the Weekend College in the mid-1970s with a mission to provide higher education to adults who could not otherwise attend college.  Around this same time, the college started the Hispanic Institute to address and support the growing Latina population on campus and in the city. In 1983, the college created the Gannon Scholars Program to provide scholarships to incoming students.  Despite its various efforts, the college faced financial issues and declining enrollment as women’s colleges fell out of favor nationwide.