Loyola University Chicago began on Chicago’s West Side as a commuter college. Its students were recent immigrants, their children, and other first-generation college students.1 As its student body grew and needs changed over the years, Loyola expanded to multiple campuses, each tailored to a specific purpose and population.

This section explores not only Loyola’s campuses and the buildings on them, but the populations served in each location. Whether in the center of downtown Chicago, out in the suburbs, or across the ocean in Italy, Loyola looks a little different to all its students. 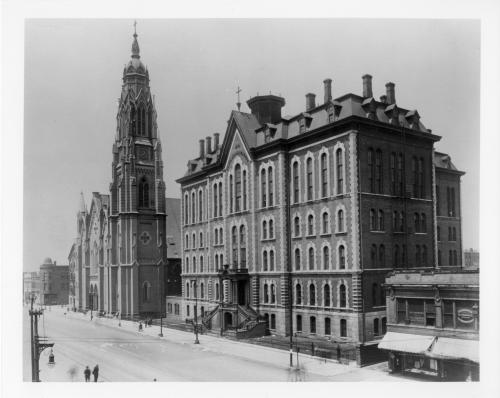 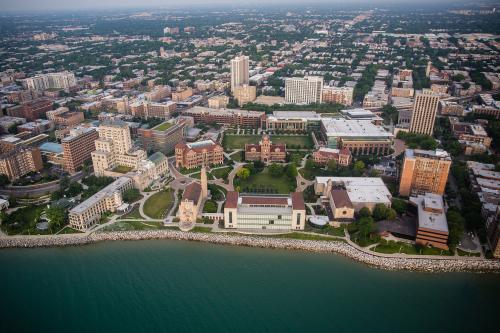 Intending to create a high school on Chicago’s North Side, Father Dumbach purchased 19.546 acres of land on the far north side in 1906, creating what is today the Lake Shore Campus. In 1909, Saint Ignatius College re-chartered as Loyola University and constructed its first building on the north campus, Dumbach Hall. By 1912, the Lake Shore Campus held its first courses. The university administration moved there a decade later. Today, the Lake Shore Campus serves as the main undergraduate campus including the College of Arts and Sciences, Marcella Niehoff School of Nursing, Institute of Environmental Sustainability, and many Graduate programs. Most of the student population attends classes on this campus. 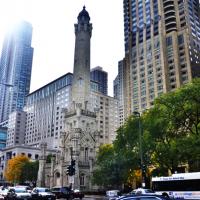 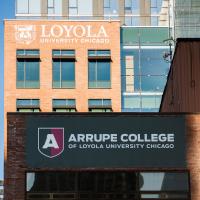 The Downtown College began in 1927, when Loyola University Chicago leased 28 North Franklin Street in downtown Chicago for evening classes at the Schools of Law, Commerce and Social Work. In 1946, philanthropist Frank J. Lewis donated Lewis Tower to the school and split the building between Loyola’s three schools and the Illinois Club for Catholic Women (ICCW), which was headed by Lewis’s wife, Julia Lewis. Loyola University negotiated full ownership of the building in 1966. Due to its proximity to the Chicago Water Tower, Lewis Tower became part of what is now the Water Tower Campus (WTC). The WTC still serves the original schools on campus with some additions, including Arrupe College, which since 2015 has offered a two-year degree program with the promise of little to no debt. 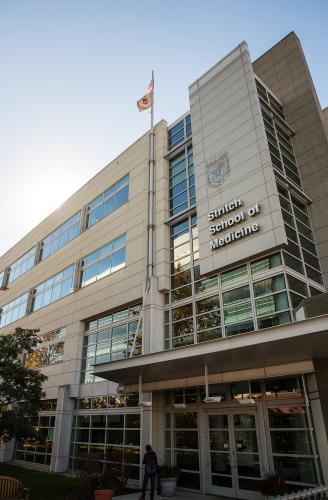 Loyola University affiliated with the Illinois Medical School in 1909 and Bennett Medical School in 1910, creating the university’s first medical facility. By 1920, Loyola assumed control of both schools, forming the School of Medicine, which was renamed the Stritch School of Medicine in 1948 to honor the Archbishop of Chicago Samuel Cardinal Stritch, a major funder and supporter of the school. Originally, the Health Sciences Campus stood on the medical campus across from the old Cook County Hospital at 706 S. Wolcott, but in 1962, Loyola University Chicago obtained a 61-acre plot of land in Maywood, Illinois next to Hines Veteran Administration Hospital. The new campus was completed by 1969 and included a 500-plus-bed teaching hospital, named in honor of Foster McGaw, who had donated 7 million dollars to its construction. Today, the Health Sciences Campus houses the Stritch School of Medicine, the graduate program of the Marcella Niehoff School of Nursing, the Center for Translational Research and Education, the Cardinal Bernardin Cancer Center, and the new Parkinson School of Health Sciences and Public Health. 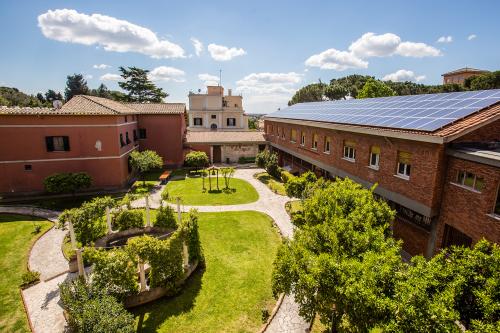 Founded in 1962 as The Loyola University Rome Center for Liberal Arts, the John Felice Rome Center (JFRC) is now named for its founder. Over its 57-year existence, the JFRC has moved three times from its original location in the Casa Italiana Viaggi Internazionali Studenti, or CIVIS, situated in the buildings left over from the 1960 Rome summer Olympics. The JFRC moved to Villa Tre Colli from 1966-1972 and to Villa Maria Teresa from 1972-1978. Now, the campus is at Via Massimi, a 5-acre campus purchased from the Dominican Sisters of Saint Catherine of Siena. The JFRC allows both Loyola students and students from around the world – over 16,000 so far – to experience a year, semester or summer of study in Rome in a diverse area of subjects.

In the Service of Others: Early and Late Diversity of the School of Medicine >>