Peace Studies and the Transition

The Peace Studies minor at Loyola University Chicago originated at Mundelein College in September of 1989. The college was founded in 1930 in Chicago, Illinois by the Sisters of Charity of the Blessed Virgin Mary (BVM), and was steeped in their commitment to peace and justice. For sixty years, Mundelein offered a comprehensive Catholic liberal arts education in the setting of a women’s college before affiliating with Loyola in 1991.

Mundelein College had a long history of peace-related work. For example, Emilie Barron represented Mundelein in 1934 at a national meeting of the Catholic Association for International Peace. During the 1940s, the Mundelein College student newspaper - The Skyscraper - reports that the college maintained two primary missions: education for Catholic life and education for work in the world. The latter emphasized the notion that there was an obligation to make a difference in the world. For example, members of the Mundelein community participated as individuals for social justice and peace advocacy during the civil rights movement. In 1965, representatives of the college including twenty-eight students and eight faculty joined one of the voting rights marches from Selma to Montgomery, Alabama. The work of the Hispanic Institute was also part of this broader work. It was founded in the early 1970s as an evening seminar and went on to become a multitiered program. The program was very supportive of the United Farm Workers and in 1974, many of their activist workers lived in the “Yellow House” on Mundelein’s campus. Cesar Chavez of the United Farm Workers was invited to Mundelein College for its anniversary in 1979 to give the homily for a shared Eucharist. He commented on the personal solace he received through Mundelein’s support and how it gave him strength to carry on with his mission. 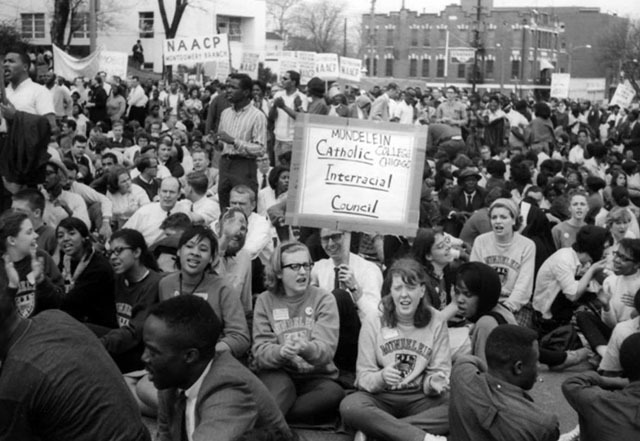 A women-focused approach was integral to the foundation of Peace Studies. In 1971, the Mundelein Faculty Senate inaugurated the Women’s Studies Committee, supporting the creation of interdisciplinary classes with an emphasis on women. By 1983, the college approved the Women’s Studies minor proposed by the committee.

Peace Studies integrated feminist perspectives and became part of Mundelein’s curriculum as a minor in 1989, with 18 students in the inaugural cohort. The minor represented the culmination of effort and deep commitment at Mundelein and beyond. It built off of the gradual expansion of Peace Studies programs throughout the country, starting at Manchester College in 1948 and taking off following the Vietnam War in the 1960s. In 1983, the United States Conference of Catholic Bishops penned a letter titled “The Challenge of Peace.” Carol Frances Jegen, BVM, and her sister Mary Evelyn Jegen, SND (School Sister of Notre Dame) in 1984 attended the anniversary retreat of Pax Christi International in Montbard, France. Mundelein was one of the original groups of colleges and universities to inaugurate the national Peace Studies Association in 1987, "an organization of college and university academic programs for the study of peace, conflict, justice, and global security."

The importance of women in the peace-making process formed a critical component of the program at Mundelein College, which emphasized the need to develop women leaders in the field of peace-making internationally. In the early stages of the Peace Studies program, the John D. and Catherine T. MacArthur Foundation supported the creation of a Center for Women and Peace in 1990. The short-lived center served as an institution for local community and international outreach by inviting communities and visiting scholars to share perspectives. The founders also envisioned that the center would provide faculty and student development grants to deepen educational and international experiences.

Upon Mundelein’s affiliation with Loyola in 1991, Kathleen McCourt, then Dean of Loyola College of Arts and Sciences, appointed a committee to guide the transition of the Peace Studies minor. The committee, co-chaired by Loyola Professor William French and Mundelein Professor Carol Frances Jegen, BVM, held discussions that led to a critical discovery of what form the program at Loyola might take and the thinking behind the Peace Studies methodologies. Loyola’s program would include the nonviolent tradition of Gandhi and Martin Luther King, Jr., which was emphasized by the Mundelein program. The curriculum design for Loyola also continued the tradition of Mundelein’s multidisciplinary approach. Loyola would add courses regarding conflict and war.  During the 1992-1993 academic year, the committee continued to sponsor events to develop the program proposal. In November 1993, the Academic Council passed, almost unanimously, the proposal for a Peace Studies minor and classes began shortly thereafter.

The current Loyola Peace Studies minor is organized around a broad definition of peace, encompassing societal peace (including work to reduce violence and inequalities within the United States); international peace (focusing on ending wars, terrorist acts, unequal distribution of resources, and other infringements on human rights and dignity worldwide); and environmental peace (involving work on sustainable resources, global warming, and response to natural and human-made disaster). Consisting of six courses (18 credit hours) including the Peace Studies Overview, the minor provides content regarding the international, societal, and ecological spheres of violence and peace. The program also focuses on methods of analysis and strategies of reconciliation and peace-making. Completing a minor in Peace Studies facilitates active and informed participation in working for peace. Students may enroll in practica and internship classes, participate in peace-related research projects, write a senior thesis on peace, or become involved with various peace activities at Loyola.